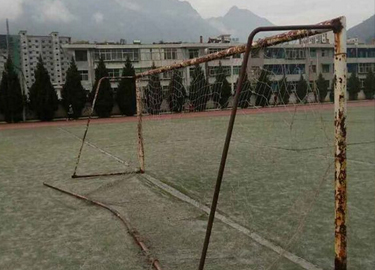 
Cao Zhenzhong, a 15-year-old senior high school student in Zhenan Middle School, was hanging a football door frame while playing in PE class. Unexpectedly, the ball door frame fell and hit his mid-abdomen, resulting in his spleen being excised and almost killed.

On the afternoon of November 28, in the general surgery ward of Zhenan People's Hospital, Cao Zhen15-year-old was infused. On the evening of November 19, he underwent splenectomy here.

"The second class on the afternoon of November 19 is P.E." Cao Zhen said that the physical education class was organized by the sports committee. No physical education teacher was seen. After the sports committee let the group run for two laps, everyone was free to move. He and some of his classmates are going to cross the playground to play badminton.

When he came to the old football door frame in the middle of the playground, Cao Zhenfirst hung it by hand, then hooked it with his feet. Suddenly, the door frame fell forward and hit Cao Zhenbelly.

"At that time, I found it difficult to breathe, especially when I could not breathe out." Cao Zhen said that there was a severe abdominal pain at that time, which was later sent to the county hospital. When he woke up again, it was about 9 o'clock that night before he knew that his spleen had been removed.

Cao Zhens chief doctor said that the goal frame hit Cao Zhens abdomen, resulting in rupture of the great abdominal artery and massive hemorrhage. In order to save his life, he had his spleen removed. It was not until November 26 that Cao Zhens was out of danger.


Cao Zhen's father provided football door frame photos. The reporter saw that the football door frame was rusty and fragmented. After that, the iron pipe on the ground has been deformed and broken with the main body of the door frame. "Such sports facilities, usually neglected maintenance, security risks, schools have not been repaired in time, how to protect the safety of students?" Mr. Cao said.

"We were very angry. After the accident, the school sent the children to the hospital. When the children were operated on, the school was gone." Mr. Cao said that no one else in the school had visited the children except the head teacher. "In addition, they just painted the worn doorframe and left it there without reinforcement, which is also a potential safety hazard for other students."

At 3:00 p.m. on November 28, in the playground of Zhenan Middle School, two doorframes have been painted white. The doorframes have the words "No climbing" on them. The broken and deformed iron pipes behind them have been repaired, but they have not been strengthened. With a little effort, the doorframes will lean forward.

"Goal frames have been used for seven or eight years, but they have not been reinforced, and they are the same everywhere." The head of Zhenan Middle School said that after the accident, the school painted the goal frame with white paint and wrote the words "No Climbing" without reinforcement. In addition, Cao Zhen15 years old, has independent civil capacity, after the accident, the school also sent him to the hospital in time.

The person in charge said that this matter has not yet been reported to the county education bureau. As for the division of responsibilities, we should wait for Cao Zhen to recover. "Then we can define who is responsible."

Fan Qin, a lawyer at Hengda Law Firm in Shaanxi Province, said that during the class, the school has the obligation to guarantee students'safety. If the school fails to fulfill its obligations of safety and supervision, it should bear the responsibility of fault.

PREVIOUS：23-year-old student died under football doorf No next